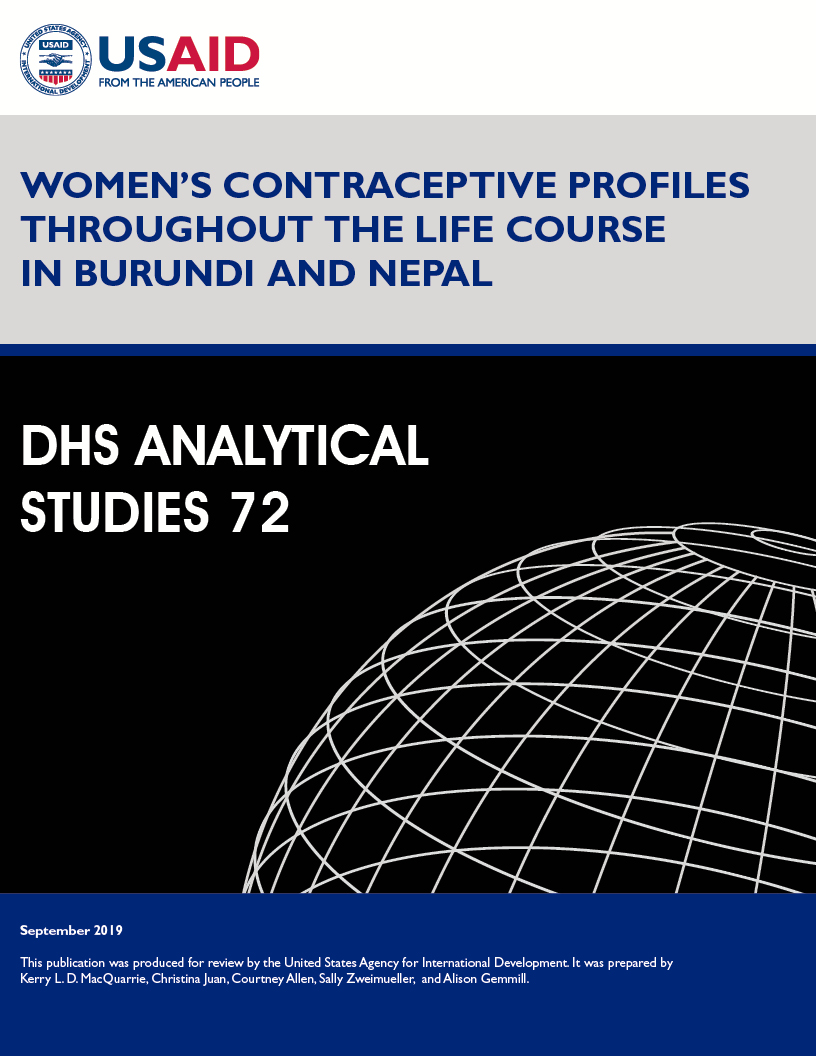 Women's Contraceptive Profiles throughout the Life Course in Burundi and Nepal (PDF, 6299K)

Women's Contraceptive Profiles throughout the Life Course in Burundi and Nepal (AS72) Analysis Briefs (PDF, 1827K)

Women's Contraceptive Profiles throughout the Life Course in Burundi and Nepal (AS72) Analysis Briefs (PDF, 1525K)

This study uses sequence and cluster analysis to identify profiles that characterize women’s dynamic contraceptive use and pregnancy experiences by using 5-year, retrospective, longitudinal data from the Demographic and Health Surveys (DHS) contraceptive calendars. We conduct this analysis in two countries with differing contexts: Burundi and Nepal. We also develop new data visualizations to display these dynamic contraceptive profiles and to demonstrate how they shift over the life course. Despite the differing contexts, we find several commonalities in the contraceptive profiles. We identify six distinct profiles in each country. Quiet Calendar and Family Builder profiles, which involve little to no use of contraception, are present in both countries and have the same age distribution. There are a greater number of small differences in the profiles that involve contraceptive use. These profiles are the Modern Mother (short-term, modern method use), Consistently Covered and Consistently Covered Mother (long-acting and permanent method use), and Traditional Mother and Consistently Traditional (traditional method use). Sequences in these profiles commonly include pregnancies in Burundi, whereas in Nepal, the Consistently Covered, Consistently Modern, and Consistently Traditional profiles consist of women who use one type of contraception, without interruption or pregnancy, for the 5-year sequence. The Modern Mother profile presents in both countries, with minor variations in the timing of pregnancy and contraceptive adoption. The largest difference between the Consistently Covered Mother and Consistently Covered profiles, which increases with age in Nepal but is concentrated in the middle reproductive ages in Burundi, is the age distribution of the other profiles of women using contraception in both countries. These differences may reflect differences in the fertility regimes and method mix of the two countries. The data visualizations of women’s dynamic contraceptive profiles, their age pattern, and characteristics of their members over the life course provide a roadmap both for expanding the analysis to additional countries and conveying the results to program managers.