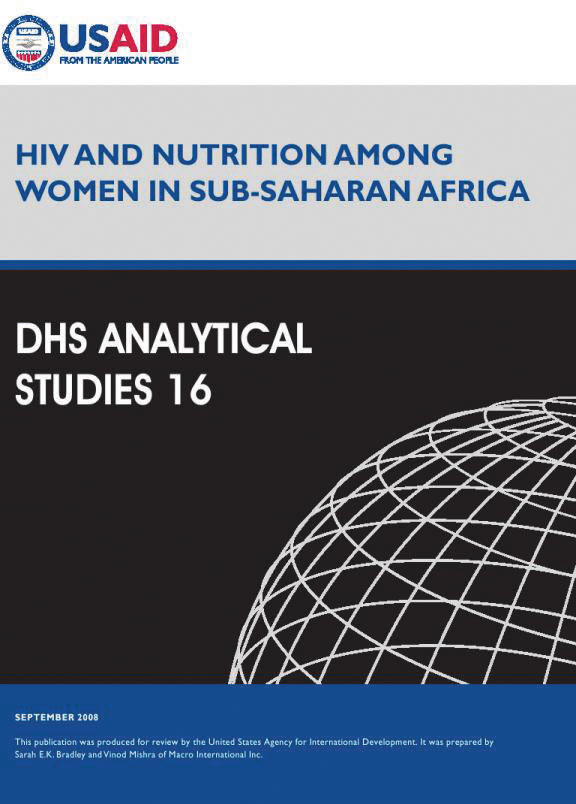 HIV and Nutrition among Women in Sub-Saharan Africa (PDF, 617K)

In the absence of antiretroviral therapy (ART), HIV-positive people will lose weight and eventually become wasted or severely underweight. However, levels of obesity and overweight seem to be increasing in several sub-Saharan African countries severely impacted by HIV and with little or no ART available. In many of these countries, HIV prevalence is higher among overweight people than those of normal or below-normal body weight. To better understand this apparent anomaly, this study investigates the relationship between HIV, body mass index (BMI), and hemoglobin levels (biomarker for anemia) among adult women in sub-Saharan Africa. The study also investigates the relationship between HIV, women’s nutritional status, and their breastfeeding mode (exclusive, mixed, or none). In pooled analysis, HIV-positive status is significantly positively associated with being overweight, and is significantly negatively associated with being underweight. After controlling for wealth and other socio-demographic characteristics, however, the relationship reverses direction, and HIV-positive status becomes significantly positively associated with being underweight. HIV-positive status is significantly negatively associated with hemoglobin concentration, and the relationship grows stronger when background characteristics and BMI are controlled for. There does not appear to be any negative impact of breastfeeding on the nutritional status of HIV-positive mothers compared with non-breastfeeding HIV-negative mothers. HIV-positive women who exclusively breastfeed their infants have slightly higher hemoglobin concentrations than HIV-negative women who do not breastfeed, after controlling for BMI and background characteristics.